Convergence of Consciousness, Elements of Creation

The convergence of consciousness is the point at which creation occurs. It is the meeting point of the necessary elements to conceive a new creation. One such point was at the creation of your universe, a moment in a place beyond existence where the convergence of self-awareness and desire merged.

The convergence of consciousness occurs within.

It is nearly impossible for humanity to perceive something outside of existence. It’s incomprehendable and can be likened to humanity’s evolutionary process of understanding the universe, believing it revolved around the earth or the planet was flat.

The internal expression of creation is consciousness, in the external manifestation of existence it is energy.

At this point in the evolutionary process of humanity’s awakening, do not worry yourself or seek to understand that which cannot yet be comprehended, that which lies beyond existence as you know it. But let us assure you there is just as great a universe on the other side, the internal side of the Big Bang as there is from its outward expression. 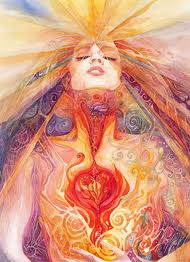 What are the elements? Be it internal or external that causes creation? In the human psyche we have spoken that thought and emotion create, and that it does. What are the internal elements of creation and when we speak of internal, we are not speaking of your internal psyche, but the point before which what you call creation came into existence. What converged on the other side of creation that brought it into manifestation? And what can one learn from this awareness?

The elemental properties of existence is self-awareness in this dimension. The internal elements, which some refer to as God and we refer to as ourselves, The One Mind and The One Thought and The One Soul, are the elements of creation. Existence occurs in the internal cauldron of consciousness when these three elements necessary for creation; the source, the observer and the manifestation become aware of each other and merge into one.

It has been stated that the Big Bang was a moment of self-acceptance.

Sentient beings in the plane of existence are an expression of that internal I AM bursting forth into creation. It is this awareness share by both sides of the “looking glass” that is the bridge between these two aspects of existence. The grand convergence of consciousness in both are the three elements consciousness expressed in the I AM of your being.

In that context, it is fair to say that God created the universe. When you understand and accept that that infinite force and source is shared by all that exists you become inseparable from it. Inner space is as grand and as glorious and as infinite and as eternal as the outer space of physical creation.

That is the elemental aspects of the convergence of creation in your existence.