The following is an excerpt from The Seven Gifts of Consciousness, The Bounty of the Universe. 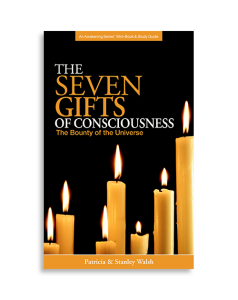 In this mini-book, we explore the intrinsic nature of consciousness in your life. Many religions have a list of attributes to be possessed and behaviors to be attained—gifts of spirit and acts of mercy—to mention just a few. Whatever the basis of your spiritual belief, there is a behavioral set of standards to be obtained. Reaching the standards in your life is generally accepted as an indicator that you are on the spiritual path of attainment.

There is truth to this belief that there are certain hallmarks of behavior that indicate spiritual grace. We would adjust that belief slightly by stating that the spiritual nature of consciousness expressed in physical form is not something so much to be attained—but accepted.

In this mini-book, we will discuss the seven gifts of cosmic consciousness, the nature of consciousness expressed in physical form. They are not so much goals to be reached but tools to be accepted in order to be conscious creators of your reality and in alignment with the creative force of All That Is.

The seven gifts of cosmic consciousness are the manner by which you accept and respond to the journey of conscious creation.  It is a journey, when understood, that takes you to the pinnacle of consciousness and the paradise of your creation.