The Universe: The Unfoldment of Consciousness

The Universe: The Unfoldment of Consciousness

Philosophers, theologians and even psychologists have sought to understand and define the concepts of reality and consciousness. It is intriguing, if not ironic, that the very sea of awareness that you swim in is exceptionally difficult to comprehend and define.

The parameters of consciousness and the limits of your reality are synonymous with each other.

It is difficult to observe a concept in which you dwell and be able to step back and observe it objectively. There is only one place in which that perspective is capable of being comprehended—and that is when you are in union with the mind of the creator, God. An analogy to explain humanity’s difficulty in defining reality and its relationship to consciousness is to see yourself standing on a large, flat, unobstructed area on your planet and walking in a straight line. All who observe your actions would agree that you are walking in a straight line. But is that true? From your perspective, indeed; in fact, it looks like you are walking away from your starting point.

But in reality, neither of those perceptions is accurate. Since you physically reside on a sphere, your path is not straight, it is curved with the planet’s contour. Additionally, because of that sphere, from one perspective it appears that you are walking away from the originating point; from another perspective, each step brings you closer to where you began.

As we have indicated in the past, all physical creation is circular in nature and the sacred symbol of the next dimension is that of the circle, or third dimensionally, the sphere. 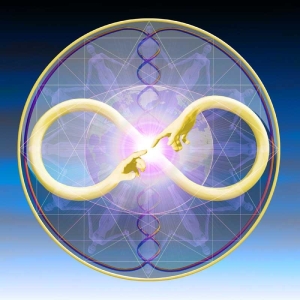 As a result, one might assume that humanity is caught in an endless loop of consciousness from which they cannot escape, that they reside within the circle of conscious reality and its boundaries are a prison from which they cannot escape. The fallacy, and also the key to understanding your reality in consciousness, is that God, as you identify the creative source, does not stand outside of creation but rather within it.

Is your individual perception a prison of limitation or a springboard to expansion? Humanity remains frustrated and unsuccessful in comprehending the relationship of the reality they experience and the consciousness they seek. As long as humanity believes that there is something or someone outside of themselves, they will remain in this dilemma.

The challenge is to understand that the observer is not separate from that which they observe.

By its very definition, you would assume that in order to observe something, you must be outside it. That is the source of the futility you experience in seeking understanding of existence, which is the union of reality, as you see it, and consciousness, as you experience it.

Humanity must observe from within. There is even scientific evidence that as soon as something is observed, it changes, quantum physics has been exploring this for some time. The reason it shifts is because when one observes something from a point of view outside of what they are viewing, they remove their consciousness from it. When one remains within that which they are observing, they then can find themselves within that which they observe.

The One Mind, the One Thought and the One Soul are three united aspects of one consciousness.

This concept of the One Mind, the One Thought and the One Soul is not only the definition of divinity, it is the blueprint for you to achieve it.

Much to be considered in this concept and we would invite you to re-read and consider carefully the words within. For upon this page is a secret being revealed that will allow you to move into a place of participation and greater understanding of consciousness’ interaction in reality. The universe, consciousness, your perception is like a great rug in a grand hall being rolled out before you with all the secrets, desires and meaning of your very being. The key to capture its gifts is to see yourself unfolding, as the universe itself does, into the awareness of the truth of your existence.

Expansion comes from within.

Every answer you desire, every desire you wish to reach, every promise you hope to experience lies within your inner most being at the center of the circle of your existence.