When one thinks of the word surrender, one often feels that to surrender is to be defeated. One surrenders when they have become overpowered, no longer able to endure, incapable of victory. Within human society and military operations this definition is quite accurate. Surrender is synomous with defeat.

So, it is expected when one is asked to spiritually surrender that it could mean defeat. We have been powerless against our own demons and beleaguered and disheveled, fatigued and confused. We give up. And, indeed, this behavior is very much parallel to society’s concept of surrender.

In fact, when one does not surrender, they are already defeated.

With that in mind, let us explore the concept of surrender and how it pertains to the aspect of Consciousness which is the thought, the One Thought, encompassed within the mind of humanity.

One might question why we would say not to surrender is to be defeated. Surrender is a lack of participation in that which we do not wish to participate in. The only way something can affect you is if it is attached to your consciousness, and the degree to which it is attached to your consciousness is in direct proportion to how it affects your reality.

Surrender is not to attach yourself to thoughts that are not beneficial. 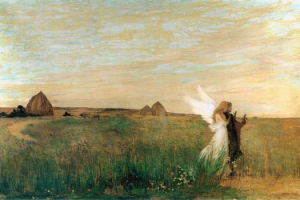 That is why it is valuable and important to declare dominion over what you choose to participate in. Otherwise especially in the world you live in, there is a legion of other negative thoughts eager to take the place of the one you just surrendered to.

Surrender is the most important position in the universe because it makes you completely free to create without exterior influences. That is why in the One Mind, the One Thought and the One Soul, the acknowledgment, the surrender and the dominion are without negativity; for, there is no place for negativity to hide. Therefore the mind of God is without negativity.

Surrender is propelled by innocence. It feels much harder to surrender when you do not feel so innocent. Innocence is created by surrender; for, it is pure and unaware of that which falls outside the mind of God.

Individuality, the concept of separateness, creates the opportunity for defeat because it creates separation and embattlement.

As we have spoken, when you incorporate anything into yourself, you cannot be at battle with it. Separation always creates conflict. There is a difference between self awareness and individuality or separateness. Individuality or separateness is a statement of attitude or your position. It must be in conflict; for, its goal is to keep you separate. Self awareness does not fear the other. Individuality must always fight for its existence because the laws of the universe are always seeking to draw it into the oneness of All That Is. Perhaps helpful to realize that the negative ego is not evil. It is the part of your fighting for your individualization, comparing, judging you–all things that create isolation.

So go forth and surrender, ignoring the thoughts that fall outside the mind of God. Remember, perhaps do you recall there was in the film “War Games” where the child was playing with the computer and the computer decided the only way to win was not to play. Therein lies the secret of eliminating negativity in you life.