In contemporary terms, you have heard it said, “No man is an island,” or that ” The loneliest number is the number one.” In the vast sea of consciousness there is an island called separateness which can be the loneliest of all places in the universe. Isolation created by an illusion that one is separate from their surroundings, their environment, those whom they encounter and the world. One can see his life marooned upon this island, hoping for a ship to appear over the horizon to save them. Or perhaps if very lucky, someone else to drift ashore and to share the island; yet, the island of individuality has an occupancy of one.

Relationships, organizations, communities and governments are built upon the need to feel connected in one’s world. Out of fear, manipulation, control and deceit and the emergence of negative sexual energy becomes the tools, perhaps even the hooks, in a vane attempt to draw that which is outside themselves onto their island of loneliness. The warm waters of consciousness that lap against the shore of separateness quickly turn into a stormy sea of alienation.

The error in thought is that individuality by its very nature creates separateness.

To be individualized in one’s perspective, physical identification and conscious awareness, one must be separate. Nothing could be further from the reality. Think of it this way: What is an island but a protrusion of an already existing land mass above the waters of the sea? The land that lies beneath the seas of consciousness are immersed, enveloped and surrounded in the oneness of All That Is.

So why the island? Why the illusion? Why the pain, the suffering created by the falsehood of being irrevocably separate from all other things? From humanity’s belief in separateness, prejudice, hatred, lust wars are created. Fear that someone, something, some belief, or some philosophy is different from you or yours. From the perspective of the universe and the interconnectedness of All That Is to say that belief is hideous is not strong enough to convey the falsehood of this premise. For one to grasp the meaning and to be able to utilize the power of individuality, one must be a student of the concept of the One Mind, the One Thought, the Eternal Here and the Eternal Now.

Individuality is simply a point of perception. It is the point of observation. 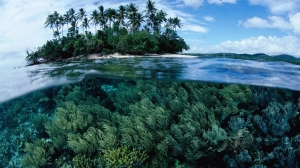 So, let us give you a new imagery that may be more helpful than the island of separation. Rather see your consciousness as a ship upon the seas of Consciousness, supported, moved by the breath and the breeze of Spirit. The sea of Consciousness supports your ship of individual perception and allows it to move freely throughout its vast waters. What is the elemental difference between these two images? Individuality only leads to the illusion of separateness when it is seen as stagnant and not moving. When your concept of individuality can move freely across the waters of consciousness your identification shifts.

Another contemporary concept would be your automobile parked, if it never moved you would feel separate, it would feel separate from the street, the village down the road. But when you allow your consciousness to move, get in your vehicle and move, it becomes a portal to where you want to go.

Separateness is the illusion when that which is observed is unable to be obtained.

Your individuality, your unique perception of the universe is the vehicle of transport across the seas of Consciousness. It is mobile, vital and moving. You are a passenger on the ship and you ride the waves of experience and are moved by the breath of Spirit that moves your sails, you will experience all things.

Individuality is seen as separateness only when it is not fluid and mobile across the seas of Consciousness.