The following is from Chapter 4, Convergence of Consciousness, the Harmonics of Creation. 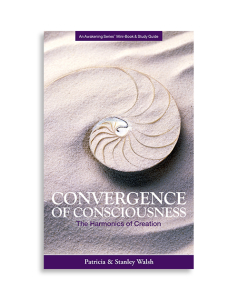 It is obvious that the history of humanity has been riddled with conflict and chaos. It would seem that humanity’s psyche gravitates to disharmony rather than balance and peace. Be it on a universal scale, a global perspective, a work environment or a family dynamic, conflict and chaos always seem to be creeping around in the darkened corners of reality.

Not to recognize this tendency on humanity’s part would be to bury your head in the sands of denial; yet, you are told that the universe and all of its components interact in harmony and balance. Therefore, is humanity’s behavior an intentional affront to the natural balance of the universe or is it out of neglect or ignorance that humanity smashes its ego consciousness against creation’s natural balance?

The first clue to the answer lies in observing the inter-dynamic relationship between the aspects of creation and the resultant energy. Nature is not always peaceful; galaxies are colliding, even as we speak. It has been indicated that chaos is the seed of creation and a necessary component of it. Perhaps humanity’s tendency is an inappropriate response to chaos because of misunderstanding.

Humanity is always seeking to anchor itself and is most comfortable when all things are stable; yet, stability leads to stagnation in the dynamic creation in which you exist. At first glance, chaos can be seen as dissonant and disharmonious, and indeed, that would be an appropriate perception. Yet, chaos’ purpose is not to be played, but rather it is to disengage all elements of a particular creation so that it can recreate itself and expand.

Chaos is the thought process of creation, be it the creation of universes, societal norms or family interaction, and should not be misinterpreted. Chaos is opportunity and is best utilized when you are willing to divest yourself of your attachments and the outcome to any particular situation or circumstance. Chaos always creates and always creates consciously. Chaos unfettered by the negative ego consciousness always has a positive outcome for all involved.

Humanity’s attraction to conflict is because you feel threatened by the potential that chaos offers. Chaos confronts your stability, tears at your investments and affronts your self-perception. Conflict, war, control and deceit will remain part of this process as long as humanity chooses to misunderstand the creative process. For humanity, fear is the shadow of chaos, the specter that accompanies it whenever it appears. Chaos makes all things possible, and humanity’s conflict with it is in direct proportion to your failure to identify yourselves as the consciousness that created it.

Consciousness and the concept of the I AM is the center still point of an ever-spiraling, ever-changing creation. Creation is an eternal process, not a single event. Existence is the result of creation, and creation is expressed through existence. Creation is a dynamic energetic force, and the convergent clashes and dissonant energies are not created by consciousness but rather by humanity’s response to that energetic flow between all things.

Seek your center point in chaos and be assured that when viewed from that place you are safe, you are secure and that all that occurs in your reality is for your well-being and benefit. Everything created, even the universe itself, is in change because of the dynamic flux between potentiality and its return to that which created it. The only unmovable, unchangeable, unfaltering element of all creation is that you exist and are an expressive consciousness of the I AM.

All creation is arbitrary and changing. Not only is it infinite in its measurement, eternal in its existence, but each and every reality within that creation is infinite and eternal in its expression. Though humanity fears those shifts and changes, that dynamic force of creation’s evolutionary process is truly the safest and most powerful place to be. Part of humanity’s fear is that in change you will have less than you had before, be it security or finance, freedom or health. In truth, when all elements of your reality are laid before you upon the table of potentiality, you are truly empowered to create what you desire.

Don’t run from the chaos of creation, rather immerse yourself in it, standing firm upon your identity of yourself as one in consciousness with All That Is, and recreate your reality. Chaos might be the toss of the dice, but you are the one who picks the die off the table to create the pattern of your creation.

Convergent clashes and dissonant energies are created by humanity’s perception. The reality is that convergent consciousness always creates. Those who are willing to accept that they are masters of their destiny and architects of their creations will find chaos as a welcome invitation to create anew.

Affirmation
I AM calm in the midst of chaos.

Activity
Seek your center point in chaos and be assured that when viewed from that place you are safe, you are secure and that all that occurs in your reality is for your well-being and benefit.
— Discover your center point and your sanctuary.
— This may take some investigation and practice.
— Meditate on quieting the mind and stilling the body to move into that place of power.

Exercises
It is obvious that the history of humanity has been riddled with conflict and chaos. It would seem that humanity’s psyche gravitates to disharmony rather than balance and peace.
— The question is in the concept
— Therefore, is humanity’s behavior an intentional affront to the natural balance of the universe?
— Is it out of neglect or ignorance?
— What is your perception of the cause of humanity’s behavior?
— What is your understanding of chaos in relationship to this concept?
— What is chaos‘ interaction with the creative process as you understand it?

Humanity’s attraction to conflict is because you feel threatened by the potential that chaos offers. Chaos confronts your stability, tears at your investments and affronts your self-perception.
— Do you agree with this statement?
— Why or Why not?
— Where have you found yourself in chaos in your life?
— What was the potential for growth, if in fact chaos creates?
— What attachments needed to be released?
— What change was being called upon?
— Could chaos been avoided in that situation?