You have often heard the expression “co-creators.” But co-conscious creators, we think, might be a little more unique.

Be it a metaphysical concept, a business decision, a social shift or a community interaction, being a co-creator—a co-participant in the creation of a common desire or goal—is something that is understood. We have even spoken of you being co-creators in the creative process of the universe, the power that emanates from co-creation where individuals join into one common consciousness and action for a common purpose.

The source, the creator, God, is a co-consciousness. It is the multiple aspects of self united in one thought for a creative purpose. 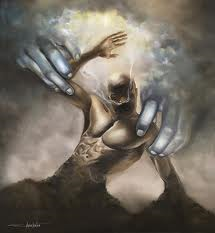 You are well aware that you are on a journey of self-expansion and spiritual awakening. In that evolutionary process of development is the discovery of other aspects of yourself. Upon the ladder of ascent to the consciousness of All That Is, as you lift yourself up each rung of the ladder, there is your own hand also reaching down to assist you. This is an analogy of the co-consciousness of creation.

As you stand on the cusp of a changing age, an age that will be expressive of the soul, would it not be appropriate to call forth and solicit that particular aspect of yourself to assist you in creating your new world? Call forth your soul into co-conscious creation with yourself. Do not hold so tightly on what you perceive your identity to be that you are unable to let go and invite other aspects of yourself in that you have not yet consciously encountered.

The co-conscious process of creation is the incorporation of all levels of your awareness into your thoughts and your actions.

In the world that you are about to enter, the voice of the soul will be louder and more expressive than ever before. In the age past, the whispering of the soul could be drowned out by the voice of the negative ego consciousness. It will be that way no more. Your soul will not only be a co-conscious creator but a trusted friend and guide as you maneuver through the realities of a new world.

You do not need to become anything, you simply need to discover that you are everything.